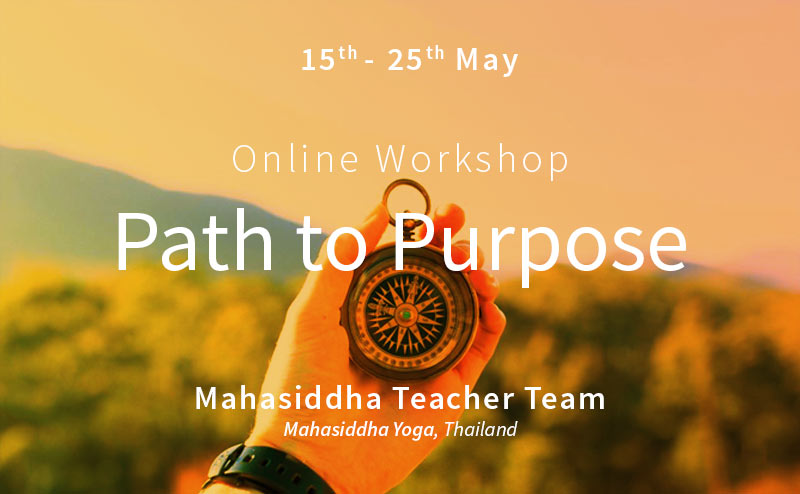 What is the Path to Purpose workshop?
In this extraordinary workshop we’ll offer a structured method of getting closer to discovering and understanding our life’s purpose. This is not a trivial pursuit – it requires a profound inner quest and an understanding of our mechanism and structure. It’s a journey worth taking as it makes us noble in spirit and true to ourselves. In the Path to Purpose workshop we combine very practical techniques with profound insights and inspiring examples of humans who lived a life of meaning. All of this will help you gain clarity of heart and confidence to pursue your mission.

You’ll be guided to go beyond cultural constructs, external impositions and social expectations and unveil your unique, remarkable path. You’ll learn to listen to the voice of your heart and through exercises, meditations and a profound form of yoga you’ll gain the needed qualities and attitudes to bring your deepest aspirations to life.

Why should I find my purpose?
A life which has meaning and purpose is wonderful and fulfilling. A life without purpose is just a selfish chase of the shadow of pleasures and superficial curiosity. Deep within each of us lies a profound need to live a fulfilling and meaningful life. Yet many of us borrow others’ apparent recipe for happiness, and struggle to replicate it only to ultimately discover it’s not our fit. So why live the life of someone else? Why do what is not meant for you? And what are you actually meant for?

We each have a unique combination of talents and inner gifts, qualities and interests. We must assume responsibility for them as they indicate the value that we’re meant to bring to the world.

What will I learn in the Path to Purpose workshop?
The Path to Purpose workshop starts from the understanding that we already know our life’s purpose, but that we’re prevented from accessing this knowledge due to the state of agitation that we experience in our mind. As such, we will explore methods to quieten the mind and amplify the voice of the heart. We’ll learn exactly what role the mind and the heart play in the process of fulfilling our purpose. Furthermore, we’ll explore the mechanism of purpose and explain how to harmoniously integrate it with the needs and requirements of our modern life (career, finances, etc). Last but not least, we’ll explore the profound connection between our purpose and our spiritual life.

Learn from our friendly, welcoming and knowledgeable teachers with 17 years of direct experience. They will guide you through authentic theory and effective training, giving you practical tools that you can include in your daily life to bring your purpose into manifestation. 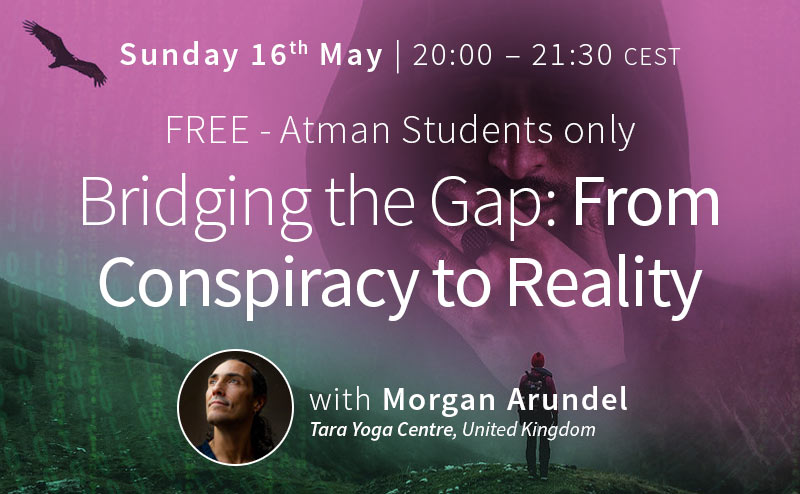 Bridging the Gap: From Conspiracy to Reality

*This webinar is for MEMBERS ONLY*

The ‘conspiracy theorist’ is a term used to single out dissenters of officially established opinions. But what makes an idea a conspiracy, and how is that different to any other theory that is commonly accepted as truth?

How much of our perception of major global issues and events is influenced, controlled and manipulated?

We will discuss the nature of conspiracy theories and their central themes, looking at the way we accept certain ideas about how our world runs as well as the various levels of power and influence that operate on our planet. 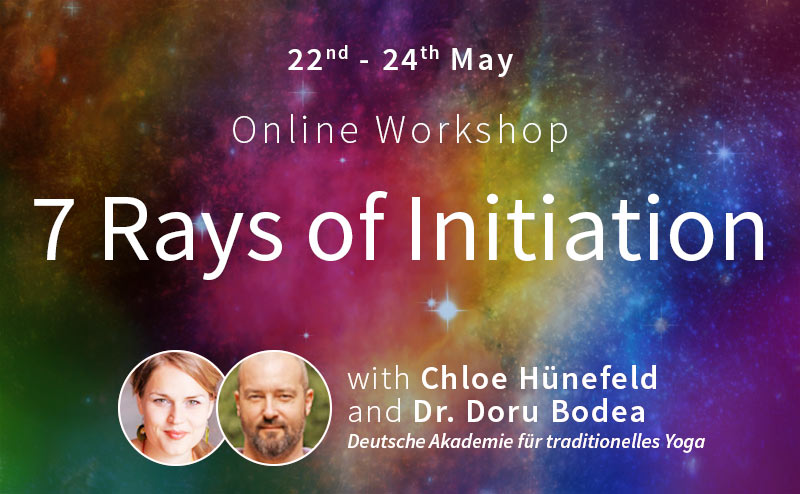 7 RAYS OF INITIATION
Unlock Your Personal Gate to the Absolute

Various authentic spiritual traditions considered as source of creation a Supreme Counsciousness, which is unique, eternal and non-divisible, often referred to as the Absolute. When unfolding into manifestation, in order to create, maintain and eventually to reabsorb it at its end, the Absolute displays 7 cardinal aspects, exactly like the white light is composed from 7 distinguished colours, known to us as the rainbow colours, from red to violet.

Each such a cardinal aspect can be identified both on the universal as well as on the individual levels of existence. The most known representation from the latter level is the structure of the chakras. These 7 distinct ranges of universal energies (or vibration frequnencies) represent 7 well-defined and equally valuable gates to the Supreme Consciousness, each of them representing a genuine spiritual path towards Godly Transcendence. They are known as the 7 fundamental rays of initiation.

This 3 days seminar aims to provide a deeper understanding of each ray and its unfoldment in all aspects of your life, becoming thus precious practical knowledge which supports your soul journey on Earth.

CHLOE HUNEFELD
Chloe is a healing practitioner and has been practicing the traditional yoga paths since 1995, with a focus on Tantra Yoga, Hatha Yoga and Karma Yoga. Since 1998 she has been teaching almost daily preventive health methods of traditional yoga and Ayurveda in theory and practice. Her interest has always been in the personal path of each individual to awaken the soul and thus to more harmony and freedom. One can follow her teaching on various topics of personality development, yoga therapy, Ayurveda and traditional Tantra Yoga (especially Kashmir Shivaism) in Berlin. Since her youth she has been interested in the exploration of archetypal manifestations inside and outside the human being. Chloe understands the contents of her intensive seminar as profound knowledge, which cannot only be used in art and culture, but also allows us to grow beyond our everyday self.

Dr. DORU BODEA
Doru is a Doctor of Theoretical Physics and has worked for many years as a researcher at various universities and research institutions. He practices Tantra Yoga since 1991 and is a yoga and tantra yoga teacher himself – with 25 years of experience.

Since the youth his passion has been alchemy – and especially inner alchemy – which is described by the Tibetan Tantric tradition as the path of the soul, where ignorance turns into enlightened consciousness like black charcoal turns into a shining diamond. 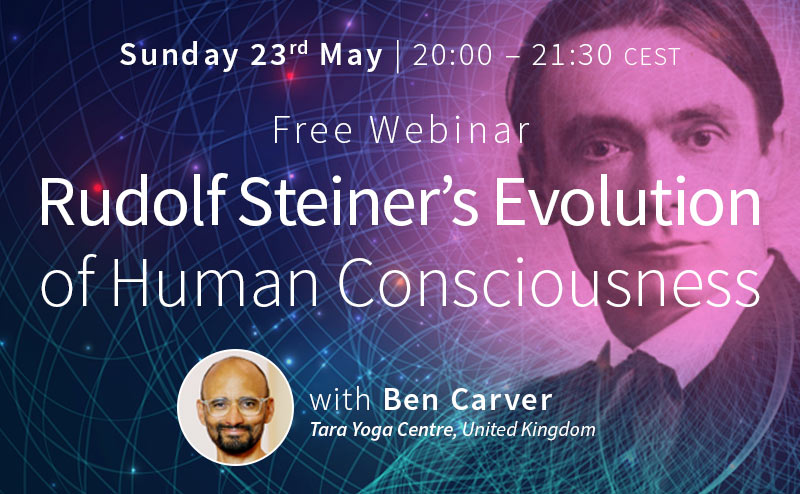 Rudolf Steiner’s view of the evolution of human consciousness

Rudolf Steiner was a remarkable spiritual teacher and mystic from the turn of the last century. Born out of the Theosophical movement, he went on to develop his own comprehensive spiritual system for the modern world: Anthroposophy – The Wisdom of the Human Being.

This was the product of his innate spiritual gifts combined with profound spiritual training and insight, enabling him to gain spiritual insight into practically any subject he was asked about, also combined with eminently practical methods of living in the world and awakening to the full human potential within.

His discourses inspired movements in education, architecture, social structure, agriculture, and more which continue to thrive and influence today.

Steiner had fascinating insights into the evolution of human consciousness, including a unique view of evolution itself, which embraced all the cycles of cosmic order and the holographic nature of the universe, giving an incredibly valuable picture of our place and function in this creation.

As a trained Steiner school teacher, Ben will attempt to give a picture of who this man was, and to summarise his picture of the evolution of human consciousness. 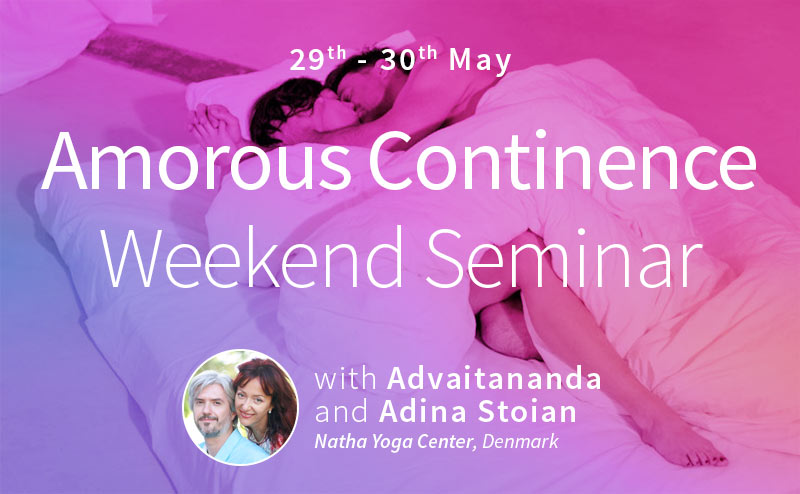 For yogis & tantrics, the benefits and effects of perfect amorous continence are well-known and for most an important practice to master.

The Amorous Continence Seminar is for aspiring yogis, tantrics, couples and singles who want to better understand and eventually master Amorous Continence, for faster spiritual progress & limitless possibilities both in the bedroom and in daily life.

Topics that will be covered 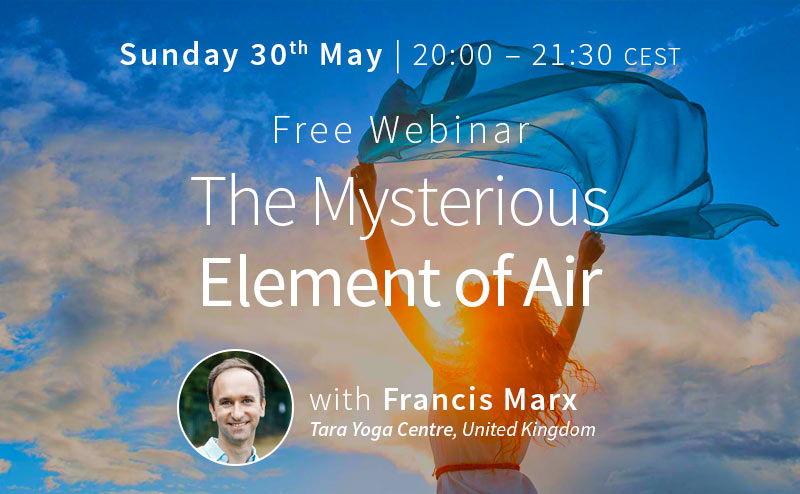 As above, so below.

Prana is the Sanskrit word for “life force” or vital principle. Prana is the force behind life itself. It is everywhere. It is that which gives life, the sum total of all energy that is manifest. In the physical manifestation, Prana comes through the five elements of nature (Earth, Water, Fire, Air and Ether).

Our microcosmic being is a brilliant pattern of these energies, a spectrum of possibilities. In every moment we have the capacity to experience the universal dimension of these energies through our chakras, being portals of resonance.

In this series of presentations we will discover diverse methods in which we can accumulate prana through the elemental energies for accelerating our transformation on multiple levels.

Air is all around us, we are constantly surrounded by it.
But we tend to take air and the process of breathing for granted, only considering its importance when it is in short supply!

Air is also important in other ways – not only for the physical body. It has some mysterious properties, and many qualities you might not have imagined.

Join this wonderful talk and discover:

About the teacher
Francis Marx combines teaching yoga at Tara with working as a doctor. He started his spiritual journey in India in the year 2000, a decisive moment that changed his life. He found the sharing of his experiences and teaching others to be another form of love. He has been teaching in various countries in Europe since 2013. 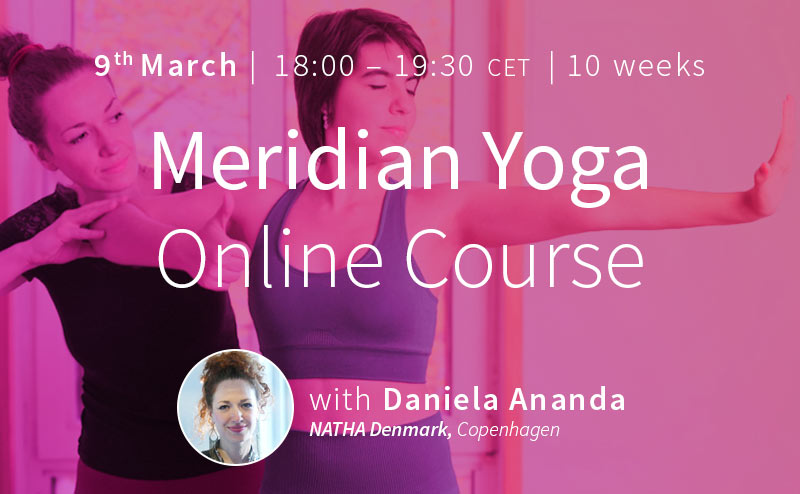 Meridian Yoga –  Online Mini Course
The meridian system is a key concept of traditional Chinese medicine, but it is shared by other ancient medical traditions from south-east Asia. According to this system, energy – also called “life force”, prana, qi, or chi- flows throughout the body in the same way as blood does, through energetic channels or meridians.
When this energy doesn’t flow naturally, or it is blocked, diseases may occur.
The goal of eastern medicine is to optimise the circulation and balance of energy through these channels, and in this way to help us have a healthier and happy life.
Meridians link all major organ systems. They are pathways that direct and flow the energy through the body.

This course will teach you everything you need to know about working with meridians for your own health and wellbeing. You will have access to a curriculum and guidance from the teacher and you will practice together all the techniques of harmonising the meridians.

Each class will be 1.30 hours long, with both theory and practice, where you will be able to experience together with the other students the benefits of each yoga technique and ask all your questions.

*If you cannot attend during those hours live, you will have the possibility to replay the courses.

* All times are CEST (Central European Summer Time, UTC+2). Check in your timezone. 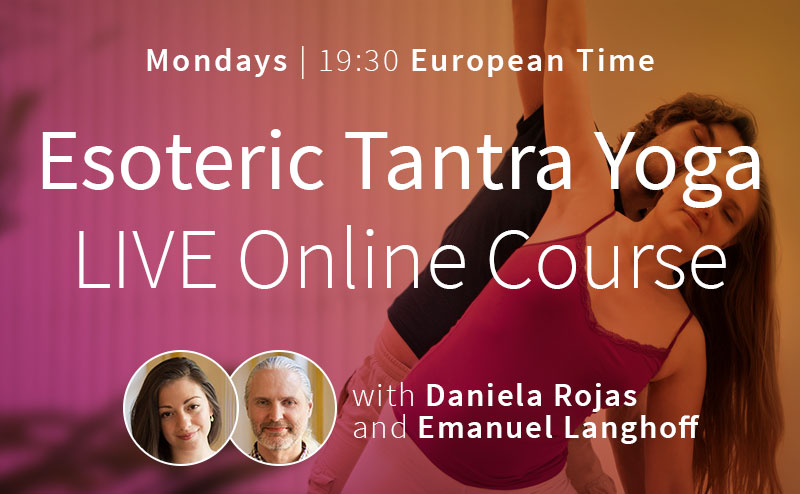 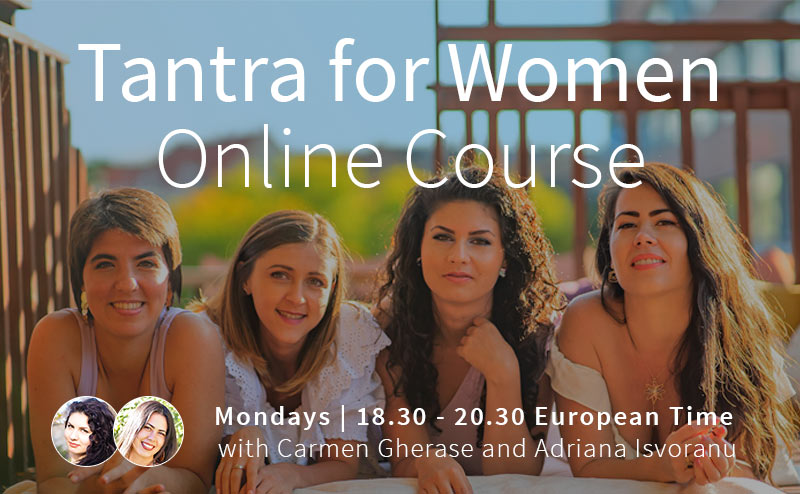 Replays of Past Events 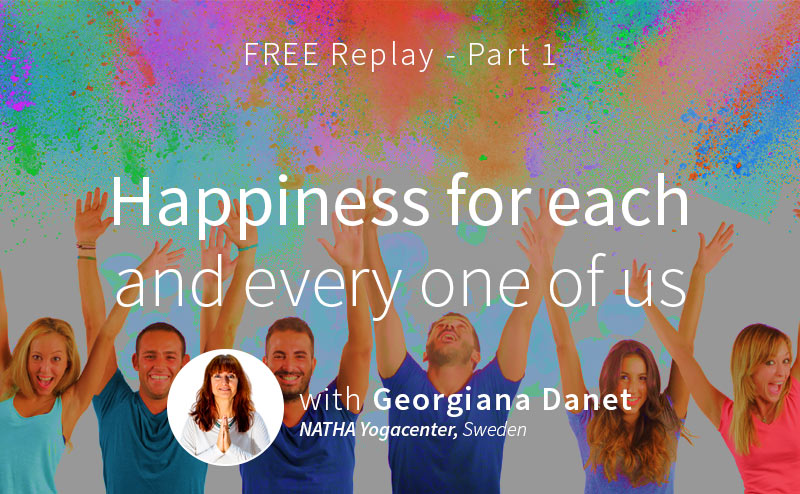 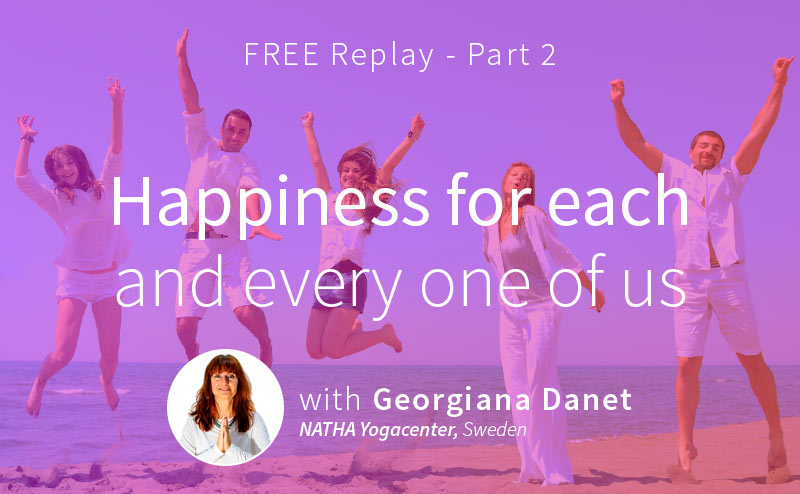 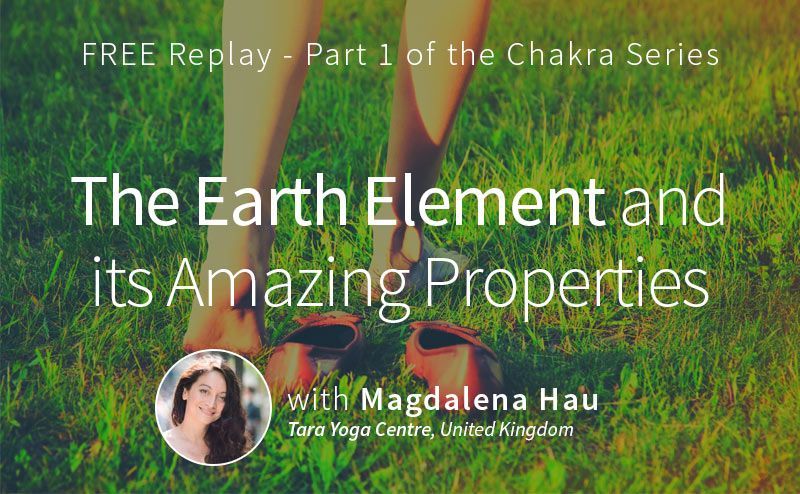 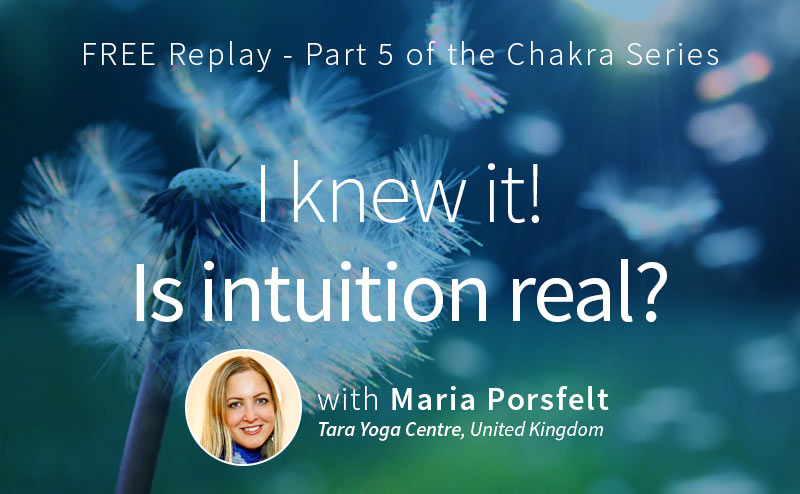 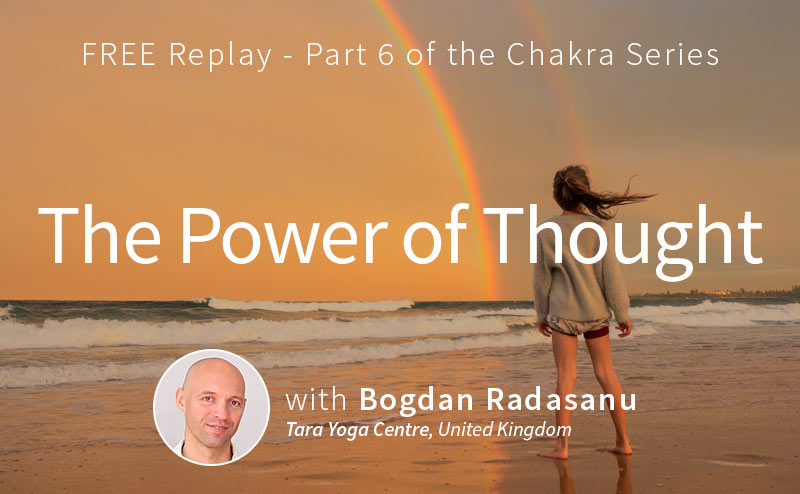 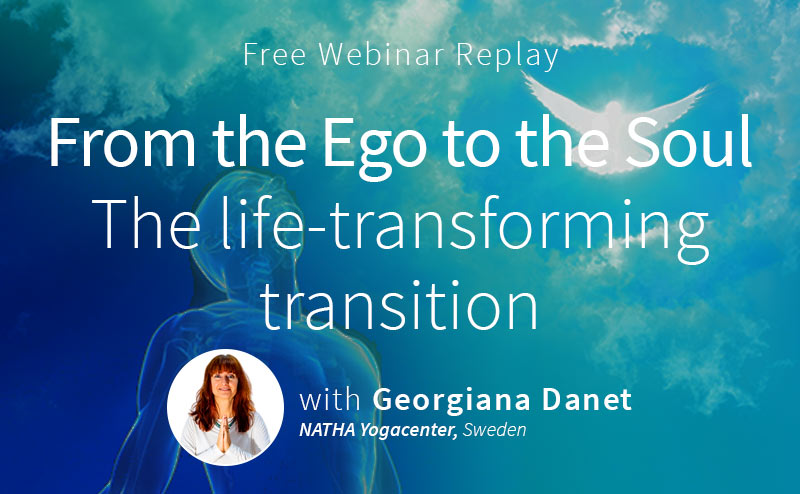 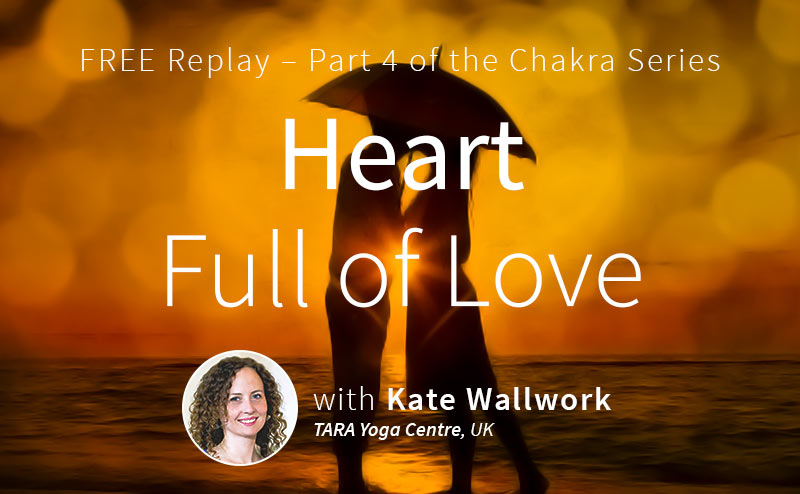 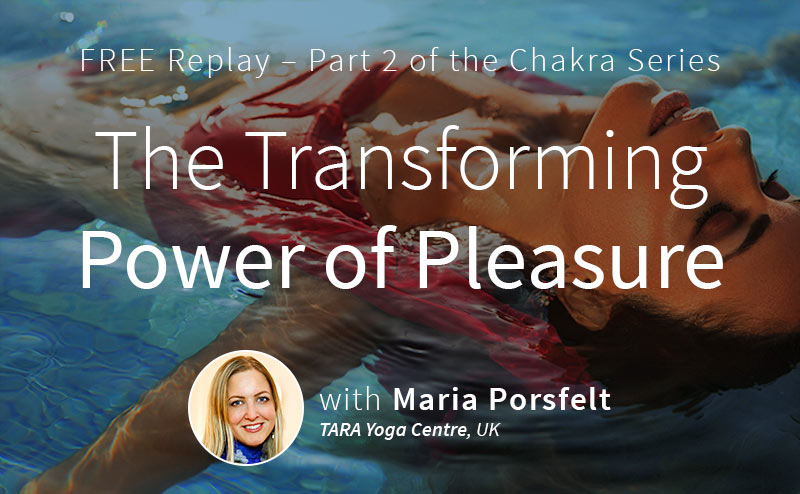 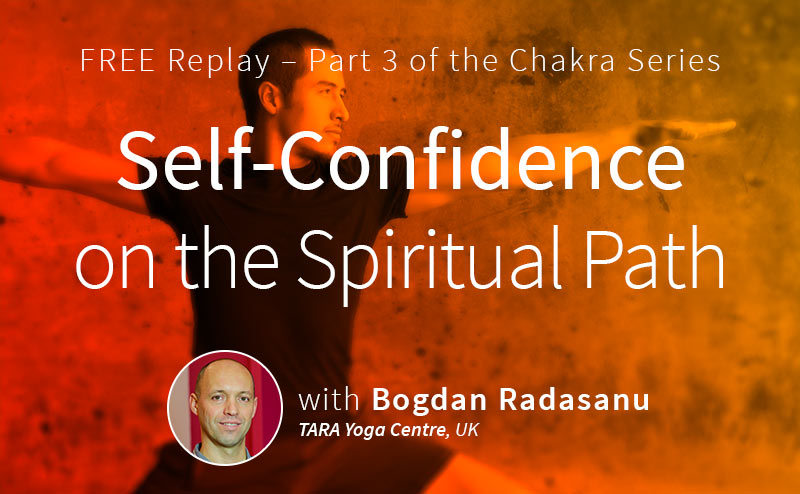 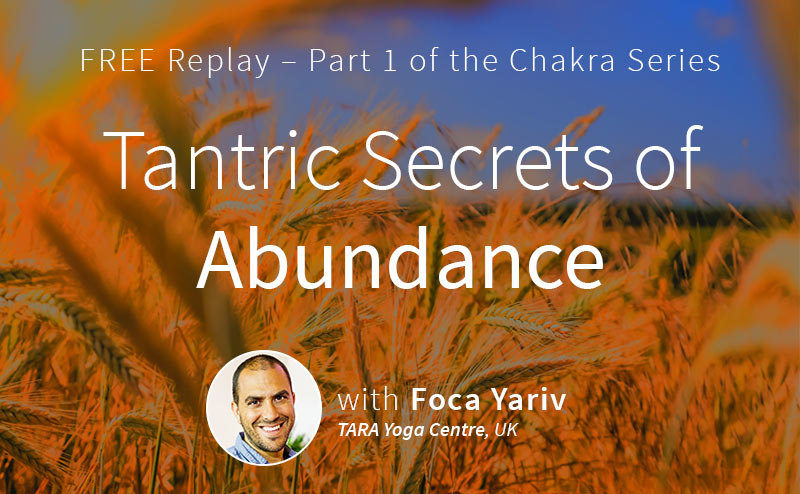 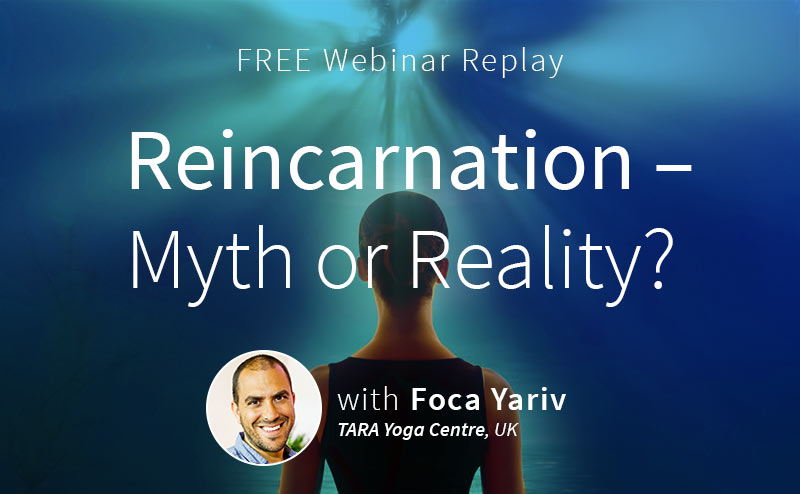 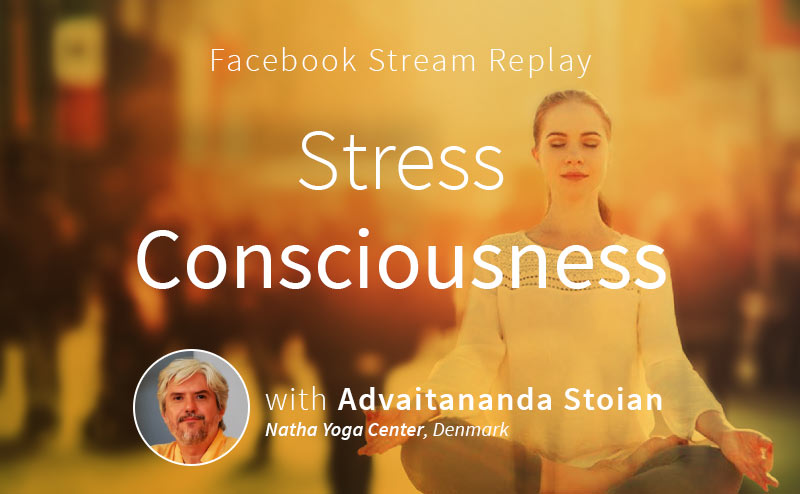 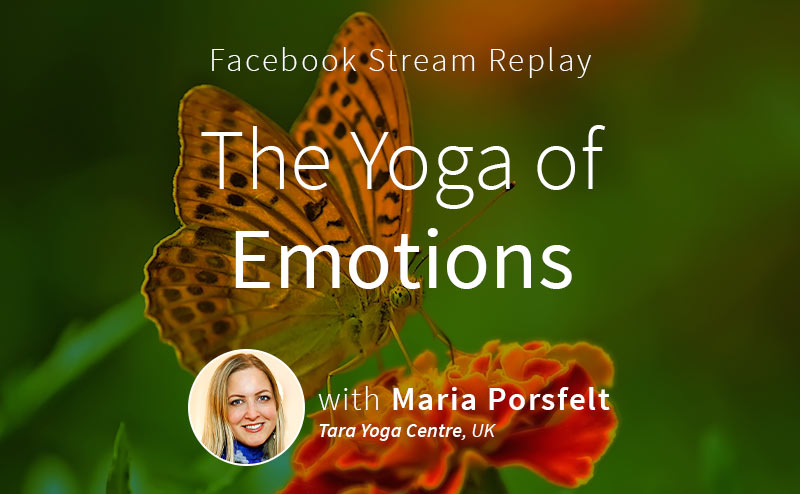 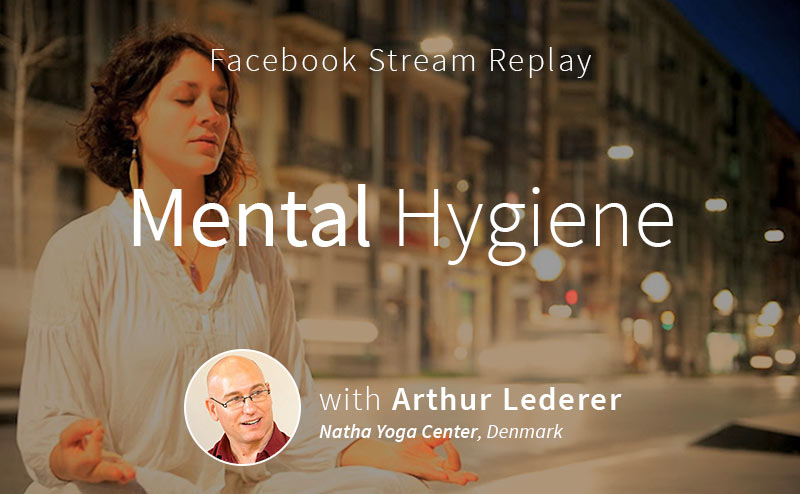 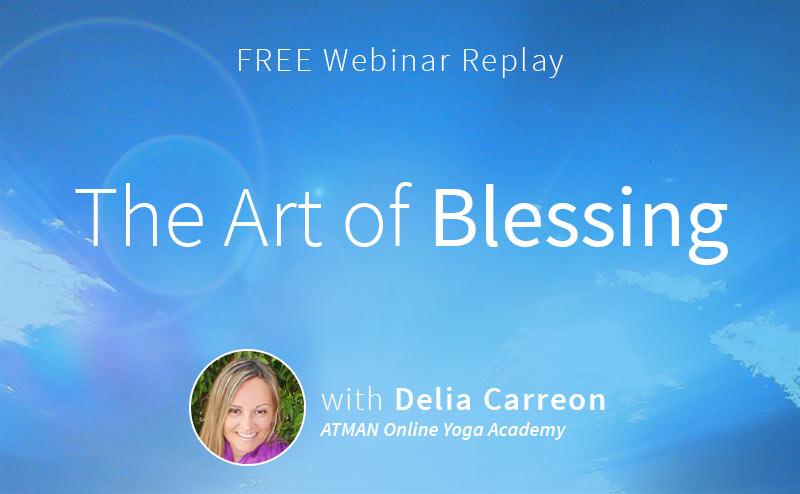 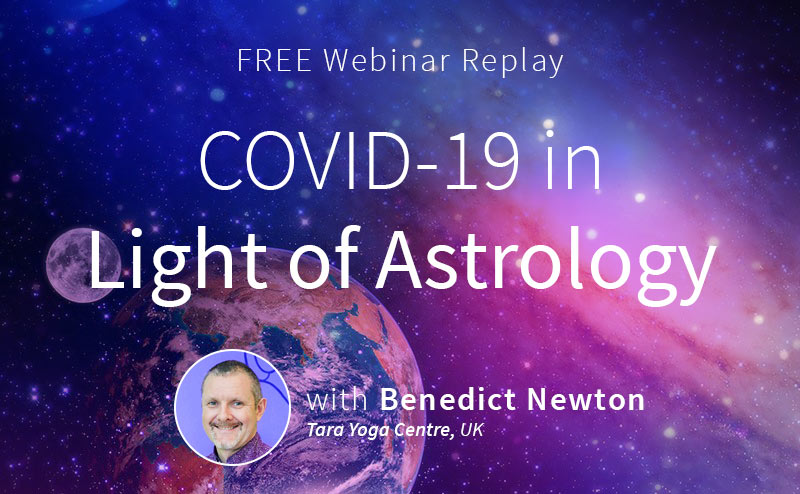 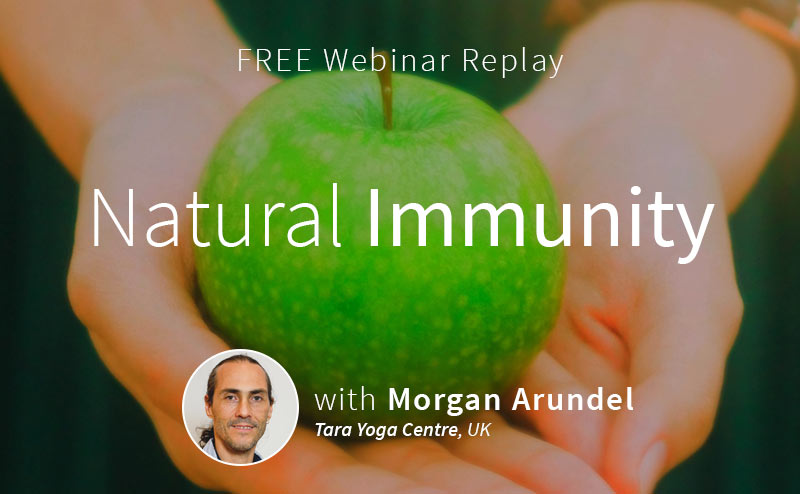 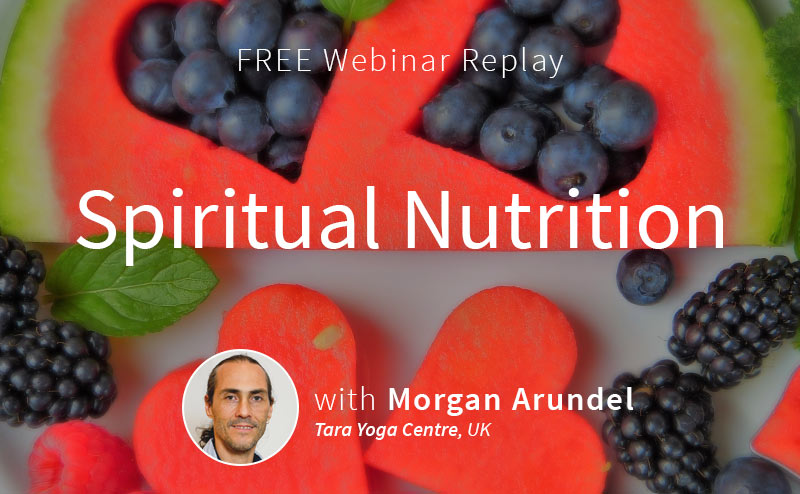 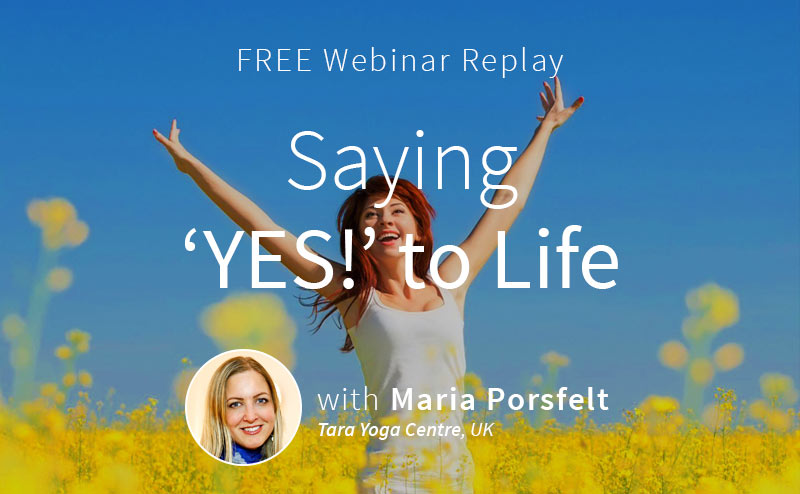 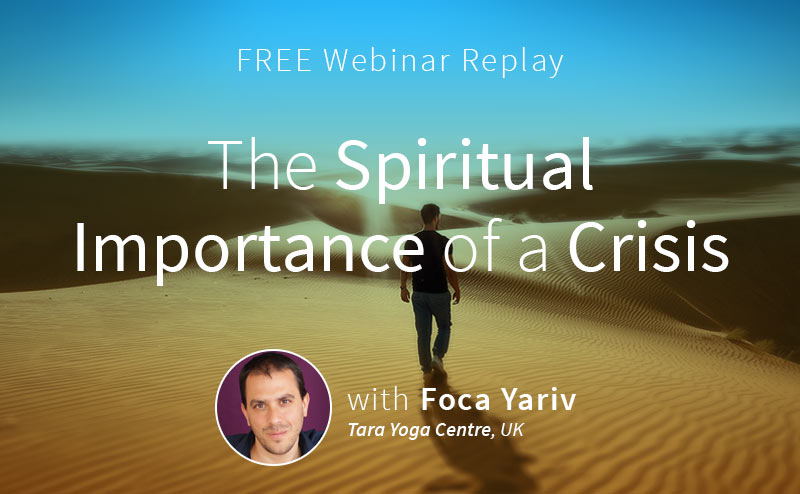 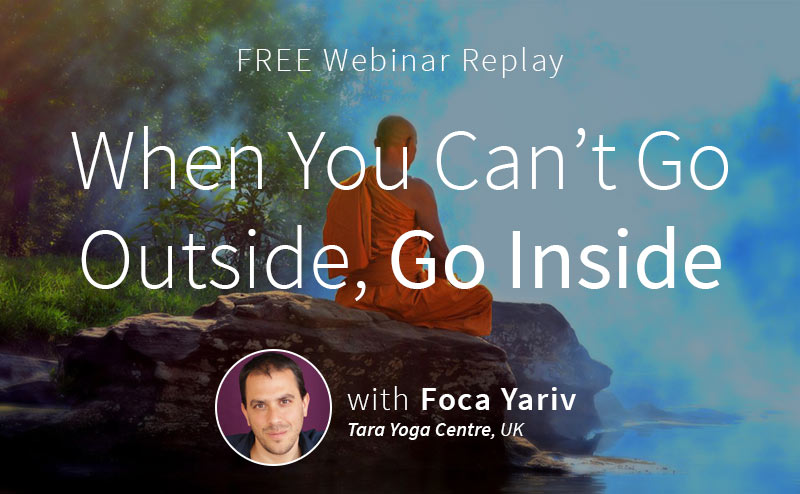